What are the Death Marches?

Try to imagine this. It is late May 1945. Clad only in ragged loin-cloths, over 500 skeletal creatures, barely recognisable as human, struggle to their feet at the Sandakan POW Compound, on Sabah’s north-east coast. Three long years in captivity, half of them on starvation rations and with little or no medical attention, have taken their toll. The grimy, wasted bodies of these once fit and strapping Australian and British servicemen are covered in sores and scabies, their filthy hair and beards matted and lice-infested. Many are suffering from tropical ulcers, some so large that shin bones are clearly visible. Others, bloated from beriberi, lumber along on sausage-like legs. They are bound for Ranau, a small village on the flanks of Mt Kinabalu, South East Asia’s highest peak, situated 250 kilometres away to the west, in the rugged Borneo jungle interior. All were members of an Allied contingent, originally numbering 2,700, transferred to Sandakan by the Japanese in 1942-43, following Singapore’s fall. Their task? To construct a military airfield, using not much more than their bare hands. 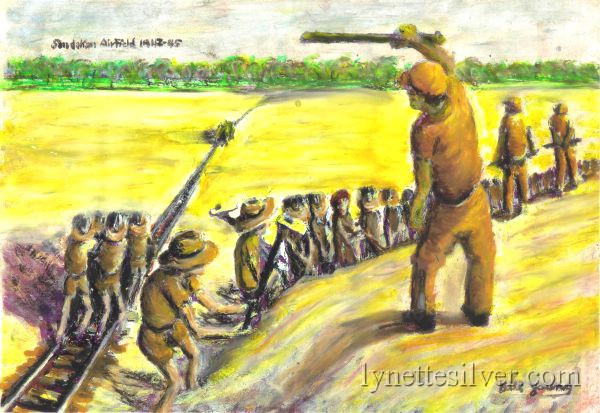 For the first twelve months or so, conditions at Sandakan were tolerable. However, in mid 1943 the Japanese discovered that the POWs not only had a radio but were in league with a local resistance organisation. The kempei-tai, or secret police, swooped. Arrests and transfers followed. Discipline at Sandakan was tightened considerably and life became much more difficult for the remaining 2,434 prisoners. Why were they marching to Ranau?

As the war ground on, conditions deteriorated. In late January 1945 the Japanese decided to move 455 of the fittest prisoners to Jesselton (Kota Kinabalu) to act as coolie labourers – only to halt them at Ranau, owing to Allied air activity on the west coast. At the end of May, there was a second march from Sandakan and in mid-June a third, comprised of about 65 men.

As both sea and air were under the complete control of the Allies, a track had been cut through the mountains, linking existing bridle-trails. Unaware that it was to be used by POWs, the local headmen given the task of creating this track had deliberately routed it away from any habitation, across the most inhospitable and difficult terrain possible. There was no medical assistance and little food. Anyone, including Japanese soldiers, who could not keep up was ‘disposed of’. Despite this, about half the prisoners completed the march, only to die at Ranau from illness, malnutrition and ill-treatment by their captors. Two Australians managed to escape in the early stages of the second march with the help of villagers, and four more successfully escaped from Ranau into the jungle, where they were cared for by local people.

What happened to the rest of Sandakan’s prisoners?

Back at Sandakan, 200 prisoners unable undertake the second and third marches also died, bringing the death toll there to about 1400. Of the 1000-odd prisoners who left on the death marches, about half died in the attempt. The rest died at their destination. The story of Sandakan and the death marches is one of the most tragic of World War Two. It is also one of the most heroic. Despite appalling conditions, the prisoners never gave up. Their heroism, their determination and their indomitable spirit are testimony to the strength of the human spirit and an inspiration to all. Of the 2434 prisoners incarcerated at Sandakan, 1787 were Australian. The remaining 641 were British. The six Australians who escaped were the sole survivors. For the full story, read Sandakan A Conspiracy of Silence, and Blood Brothers.

You can gain some insight into the heroism of the prisoners who died at Sandakan or who marched to Ranau, by joining a trek. To follow in their footsteps,  go to www.sandakandeathmarch.com Map of the trek route